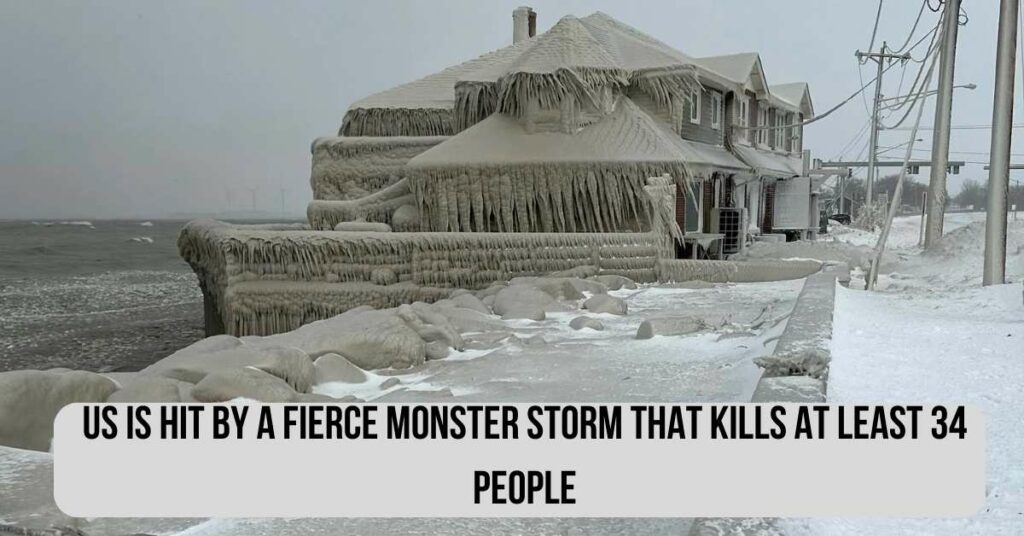 Buffalo (US): On Sunday, millions of people hunkered down against a bitter cold to weather the winter storm that has already claimed the lives of at least 34 people across the country and is predicted to take more. The storm has trapped some Americans inside their homes with towering snowdrifts and cut power to tens of thousands of homes and businesses.

The storm’s size has been almost unheard of, spanning from the Rio Grande near the Mexican border to the Great Lakes near Canada. According to the National Weather Service, temperatures fell sharply below average from east of the Rocky Mountains to the Appalachians, and almost 60% of the US population was under some winter weather alert or warning.

After a bomb cyclone, which occurs when atmospheric pressure rapidly drops in a strong storm, develops near the Great Lakes, travelers’ weather woes will likely worsen, with hundreds of flight cancellations already and more anticipated.

The governor of New York, Kathy Hochul, stated that nearly every fire engine in the city was stranded on Saturday and urged residents to observe the ongoing traffic ban in the area on Sunday. According to officials, the airport will be closed until Tuesday morning. According to the National Weather Service, the Buffalo Niagara International Airport received 109 centimeters of snow on Sunday.

When it was daylight, hundreds of residences were dark due to a lack of power, and others were decorated with unlit holiday displays. Cars were almost completely buried under 6-foot snowdrifts.

Forecasters warned that an additional 1 to 2 feet of snow were predicted in specific locations through early Monday morning amid wind gusts of 40 mph as snow swirled along untreated and impassable streets. There were two “isolated” incidences of looting during the storm, according to police reports from Sunday night.

As a result of emergency personnel being unable to reach them in time to treat their medical issues, two people died Friday in their suburban Cheektowaga, New York, homes. County Executive Mark Poloncarz said there could be additional fatalities as 10 more people, including six in Buffalo, perished in Erie County due to the storm.

One of these things is not like the others. #WinterStorm #weather #California pic.twitter.com/mDTZwSq8w5

According to Poloncarz, “some were found in cars, while some were located on the street in snowbanks.” We know individuals who have spent longer than two days stranded in their vehicles.

Buffalo residents were rushing to find heat to survive the city’s most sustained snowfall, which Hochul described as freezing weather and daylong power outages. That, however, was not an option for some, such as Jeremy Manahan, who, after nearly 29 hours without electricity, charged his phone in his parked car.

There is only one warming shelter, but I couldn’t reach it because of the distance. I definitely can’t drive because I’m stuck,” Manahan remarked. And being outside for more than ten minutes results in frostbite.

Ditjak Ilunga, a resident of Gaithersburg, Maryland, and his daughters were traveling to Hamilton, Ontario, to spend Christmas with relatives on Friday when their SUV became stuck in Buffalo. They struggled with the engine running in the wind and snow for hours because they couldn’t call for assistance.

Ilunga decided to change the raging storm to get to a nearby shelter at 4 am on Saturday when their fuel was almost completely depleted. While 16-year-old Cindy held their Pomeranian puppy and followed his footprints through drifts, he carried 6-year-old Destiny.

Ilunga recalls thinking, “If I stay in this car, I will die here with my kids.” When the family entered the refuge via the doors, he sobbed. It is something I will never forget.

Power was lost due to the storm in towns from Maine to Seattle. But around the US, heat and lights were gradually being restored. Less than 200,000 people remained without power on Sunday, down from a peak of 1.7 million, according to poweroutage.us.

Following PJM Interconnection’s announcement that its utilities could meet the day’s peak electrical demand, concerns about rolling blackouts throughout eastern states decreased on Sunday. The 65 million customers of the mid-Atlantic grid operator were urged to use less electricity on Saturday due to the cold.

Less than 6,500 customers in North Carolina were without electricity, down from a peak of 485,000. Tens of thousands of residents in New England now have access to electricity, leaving just under 83,000 without it, mainly in Maine.

About 34,000 homes in New York still lacked electricity on Sunday, including 26,000 in Erie County, where utility workers and hundreds of National Guard soldiers battled strong winds and struggled to avoid becoming stranded in the snow.

Over the past few days, storm-related fatalities have been reported across the nation: six drivers were killed in crashes in Missouri, Kansas, and Kentucky; a falling branch struck a Vermont woman; an apparent suicide; 12 people in Erie County, New York, ranging in age from 26 to 93.

Another in Niagara County, where a 27-year-old man was overcome by carbon monoxide after snow blocked his furnace; ten in Ohio, including an electrocuted utility worker and those killed in multiple cars City officials in Jackson, Mississippi, stated on Christmas Day that people must now boil their drinking water because water lines are breaking in the arctic conditions.

William Kless was awake on Sunday morning in Buffalo. He made a Merry Christmas call to his three children at their mother’s residence before boarding his snowmobile for the second day of ferrying people from stranded automobiles and chilly homes to a church serving as a warming shelter.

On Saturday, he claimed, he brought around 15 people to the church in Buffalo, including a family of five who was transported one at a time through thick, wind-driven snow. Additionally, he returned a man in need of dialysis who had been trapped in his automobile for 17 hours so that he could receive treatment at home.