After the two successful films of ‘Now You See Me’ is coming back for the third installment.

“The Four Horsemen” is back to give you a hell of a ride.

Now You See Me is a crime thriller that first premiered in 2013. Written by Ed Solomon, Boaz Yakin, and Edward Ricourt, it follows the story of a group of magicians called “The Four Horsemen” who are experts in committing heists.

Though it received mixed reviews from critics, fans excessively praised it for the action, story, and visual effects. The first film received an excellent IMDB rating of  7.2 out of 10. The film proved to be a huge commercial success and generated more than $200 million in profit.

The success of the first movie resulted in the second movie titled Now You see me 2.  The sequel premiered in 2016.

The second installment failed to meet the expectation of the fans. The movie has to face trolling due to its poor storyline. It just got an average IMDB rating of 6.5 out of 10. This time, the film performed average on the box office and generated less revenue than the first film.

In 2015, Lionsgate teased the fans with the development of a third movie.

However, Fans got worried about the future of the film due to the poor performance of Now you see me 2 . However, fans took a sigh of relief when Lionsgate confirmed the third installment in April 2020.

Here is its release date, cast, trailer, and more updates so far.

Now You See Me 3 Release Date

Crew members are also one of the causes of delay in the project. The scripter of the first two films, Ed Solomon, has left the show. But worry not, Folks! The Oscar nominee, Eric Warren Singer, is on board to create a fascinating story for Now, You see me 3. The director of the two films, Louis Leterrier, had left the fans as well. But, now David Gould is on board to direct it. 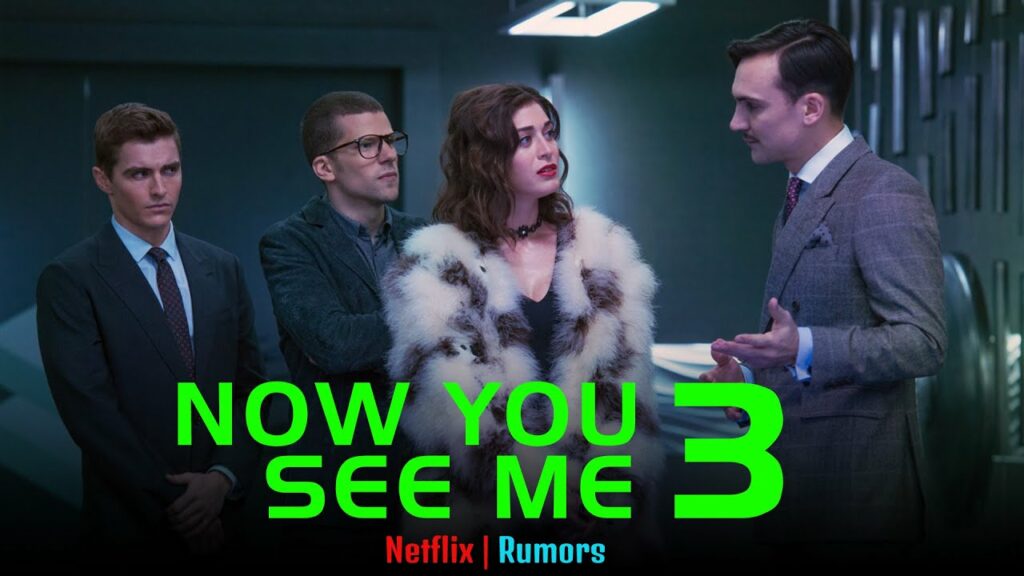 With such progress in the development of the movie, Liongate scheduled it to premiere somewhere in 2022.

Now you see my films stars a few big names- Morgan Freeman, Woody Harrelson, Jesse Eisenberg, Daniel Radcliffe, Isla Fisher, Michael Caine, Mark Ruffalo, and Dave Franco. But let’s see how many of them will return for Now you see me 3.

According to Deadline, Eric has planned to bring a few of them back.

Lionsgate, praising Eric, stated that he had always been excited with the art of illusions. He further said that the oscar nominee had come up with a great story that would take The Four Horsemen to just a new level with some old and new characters.

Going further, he said Now you see me had never failed to surprise its fans with thought proking stories and mesmerizing magic tricks of the illusionist. And they cannot show the audience the same tricks again and again. So they are coming with bring surprises.

From the Lionsgate revelation, it is clear that the talented stars from the earlier movie will be part of the upcoming movie with few new names.

So be ready, folks for shocks, and surprises.

Keep your eyes on the cast to know the rest of the characters.

Both parts of Now you see me centered around a group of illusionists who commit few big heists all the time. The bunch of illusionists assembled by magic called Eye to use their talent to commit theft and Robbery. Due to the above, they came under the Radar of the FBI and Interpol.

We witness great twists and turn that lead to few shocking revelations about the world of The Eye. Unfortunately, the viewers had not fully explored the world of Eye. There is much more left to it.

Now you see me 3 will possibly explore the world of Eye, and we might get to know about its inner working. Though the showrunners have not unfolded the potential plot, the revisit of The Four Horsemen is sure.

Whatever the storyline will be, Now you see me 3 will be full of lots of trickery, magic, heights, and more.

Now You See Me 3 The Trailer/Teaser