Isekai Quartet is a Japanese comedy, isekai anime series, connected to a list of Kadokawa light novel series. The anime is the crossover between the light novel series, Overlord, Re: Zero − Starting Life in Another World, KonoSuba, and Saga of Tanya the Evil.

The story follows the protagonist from each of the above light novel series, who unknowingly entered the parallel universe by pressing a button.

Written and directed by Minoru Ashina, the series first premiered on

The anime got a positive response from the viewers and scored an IMDB rating of 7 out of 10.

Consequently, the anime renewed for the sequel that premiers in January 2020. This time, the characters from Cautious Hero: The Hero Is Overpowered but Overly Cautious, and The Rising of the Shield Hero had entered the parallel universe.

Season 2 also ran for 12 episodes and finally ended in March 2020.  Since then, fans were expecting season 3 of the anime. But, an anime film titled Isekai Quartet The Movie -Another World was announced in July 2021, along with the third installment of the anime.

Here’s everything you need to know about the upcoming movie.

The Release date of Isekai Quartet: Another World

hough Kadokawa has not announced the release date for “Isekai Quartet: Another World”, it has confirmed that the movie is coming sometime the next year. The exact date of release is yet to be out.

Unfortunately, the announced release date is not international. The upcoming will arrive only in Japan in 2022. There is no confirmation regarding the International release of the movie.

The Official Twitter account has confirmed that the movie will first premiere in Theaters in Japan in 2022.

Do not be disheartened, Folks. As the premiere date is arriving near, we will soon have the announcement for the international release also.

The trailer of the upcoming film has also only confirmed the release year and not the premiere date.

So, keep your eyes on the release date till it gets confirmed. 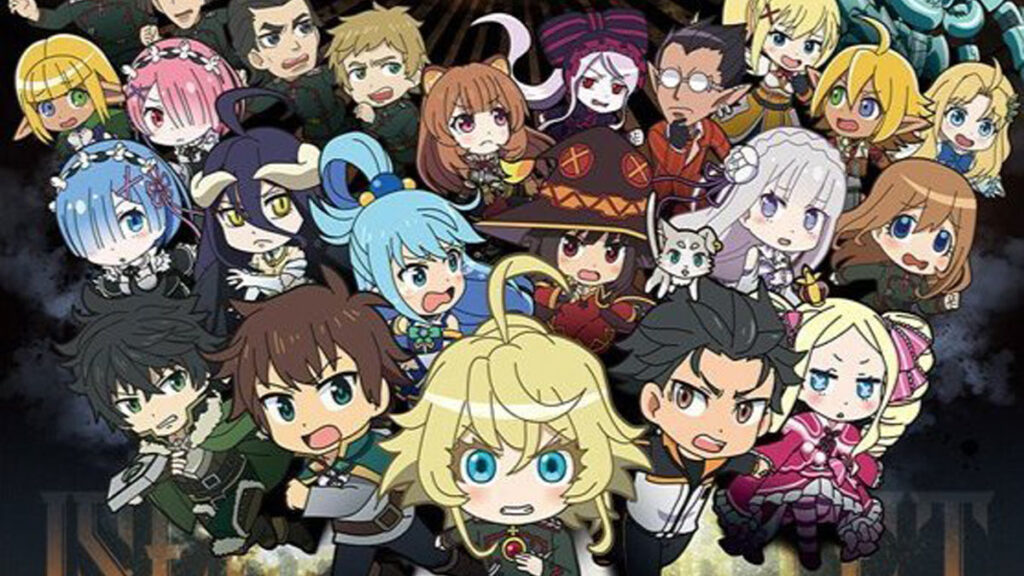 The Cast of Isekai Quartet: Another World

Almost all of the staff from the earlier two seasons of Isekai are back for the Isekai Quartet: Another World. Minoru Ashina, the writer, and the director have reprised his role. Further, the chief animation director and character designer, Minoru Takehara, are back as well.

Studio Puyukai also produced the animes like Re: Zero spin-offs Re: Zero will do animations.

If we talk about the characters in the movie, the main characters from Kadokawa’s other anime projects will be seen in this project.

The short trailer/ teaser of the film has unfolded multiple characters from “Cautious Hero: The Hero is Overpowered but Overly Cautious, “Re: Zero Starting Life in Another World,” “The Rising of the Shield Hero, and “KonoSuba, Saga of Tanya The Evil,”

In addition to the known cast, Kadokawa has featured new characters in it. According to Comicbook.com, Isekai Quartet teases the fans by saying that they will see some new faces from some other projects of Kadokawa.

However, it is not clear whether the statement was for the movie or the third season of the Isekai Quartet that is underdevelopment.

Well, Kadokawa will confirm it soon with some more updates.

So stay tuned till then.

The Plot of Isekai Quartet: Another World

Kadokawa has not unfolded the potential storyline of “Isekai Quartet: Another World,”. However, given the available information, the characters will deport to some parallel universe just like in the anime series.

The movie will have a cross-over like the anime.

Each of the protagonists from “Re: Zero − Starting Life in Another World,” “Overlord, “Saga of Tanya the Evil,” and “KonoSuba,” had pressed a button after which they traveled to another world. They were all placed in the highschool. As the series poceeds, they began to grow and in season 2 the protaginist of “Cautious Hero: The Hero Is Overpowered but Overly Cautious”, Shield Hero” also became part of that high school by the same process.

Isekai Quartet: Another World might follow the same concept. This time the protagonist from other Isekai Quartet anime will join the earlies students. There is the possibility that the student will have grown and now can be in the university. Or they can travel to a whole new world.

Well, anything can happen. It is not good to predict much with such meager information.

Well, whatever happens, the film will bring lots of laughter to you.

The Trailer/Teaser of Isekai Quartet: Another World

Kadokawa has not dropped the trailer of Isekai Quartet: Another World so far. However, we have a short teaser of about 30 sec as a first look at the anime. The teaser revealed a few of the characters and confirmed the official release year of the upcoming film. Once Kadokawa releases the official trailer, we will update it here.

Sadly, there is limited information available about the Isekai Quartet: Another World. But, as the production of the film progress, the creators will share more details with the fans.

To subscribe to our website to get all the updates concerning Isekai Quartet: Another World and other upcoming anime series.