Nine-Nine! You might be hearing this for the last time as NBC has confirmed that b99 will return this August. The eighth season will be the final season of this American sitcom revolving around the lives of a group of police officers. Ever since the show made its debut on NBC in 2013, it has become famous globally. Nationwide popularity of the show made its eighth season possible. The news of it being last season induced mixed feelings among the fans. Let us see what we have for the Brooklyn Nine-Nine Season 8.

Season 7 of Brooklyn 99 premiered in 2020, ever since there was on and off news about another season. Instead of George Floyd’s protests, the show was almost canceled at one point. However, NBC and universal televisions allowed the show to be produced. The show producers cut and compiled the show with eight episodes in June 2020. The filming was stopped and started multiple times in the surge of Covid-19 and George Floyd protests going on in the US. Now that filming has finally been wrapped off in June 2021, it is all set to be released on August 12, 2021. There would be back-to-back episodes every Thursday, 8 p.m. ET at NBC. 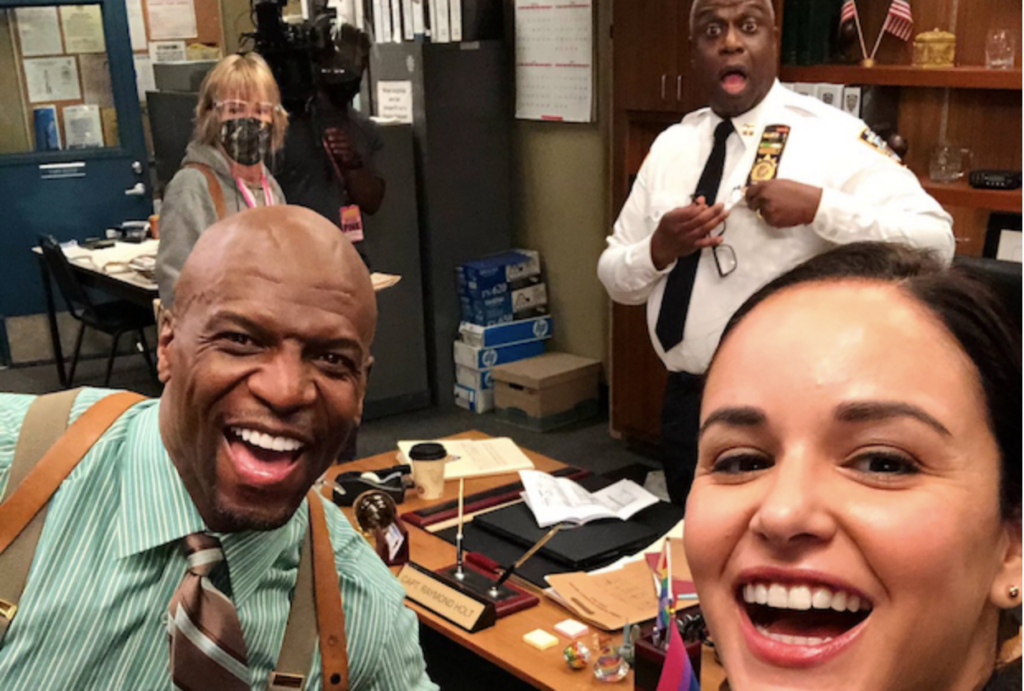 These are played by:

Recurring members of the show are

Brooklyn 99 is an American sitcom featuring action drama, romance, comedy, and crime. It revolves around the lives of 6 detectives, their Sergeant, and their captain who work in the fictional 99th precinct of the NYPD. Season one of the show started with the 99th precinct welcoming their new captain, Captain Raymond Holt. After the show moved further, we saw Jake and Amy, from fighting and competing to be the best, fell in love with each other.

Detective Jake’s best friend is Detective Charles, who lives with his girlfriend and has adopted a baby boy Nicholaj. Detective Rosa is tough and kept to herself coworker at 99. Terry Jeffords is the Sergeant at 99 and the father of twin daughters.  Detectives Scully and Hitchcock are the oldest members of 99, who do almost nothing. Gina Linetti was the sarcastic administrator at 99 who had left the show. And the leader of 99 (nine-nine) leader is Captain Raymond Holt, a Black Queer member, married and lives with his husband, Kevin.

The show has evolved around seven seasons where the characters became each other’s family. At the end of season 7, married couple detective Jake and Amy give birth to their first child. Season 8 is expected to revolve around their challenges as new parents. In addition, season 8 will also bring realistic issues on the screen, like the black lives movement. The comedy and action will be the same in the show.

Season 8 teaser has been released, which gives us a sneak peek into the madness and adventures of season 8 of Brooklyn Nine-Nine. A full-blown trailer has not been released yet. As soon as it comes, we might get further insights into the show.