Colorado’s psilocybin mushroom legalization initiative was narrowly in the lead on Wednesday, 51% to 49%.

As the results of Proposition 122 were still being counted, about 37 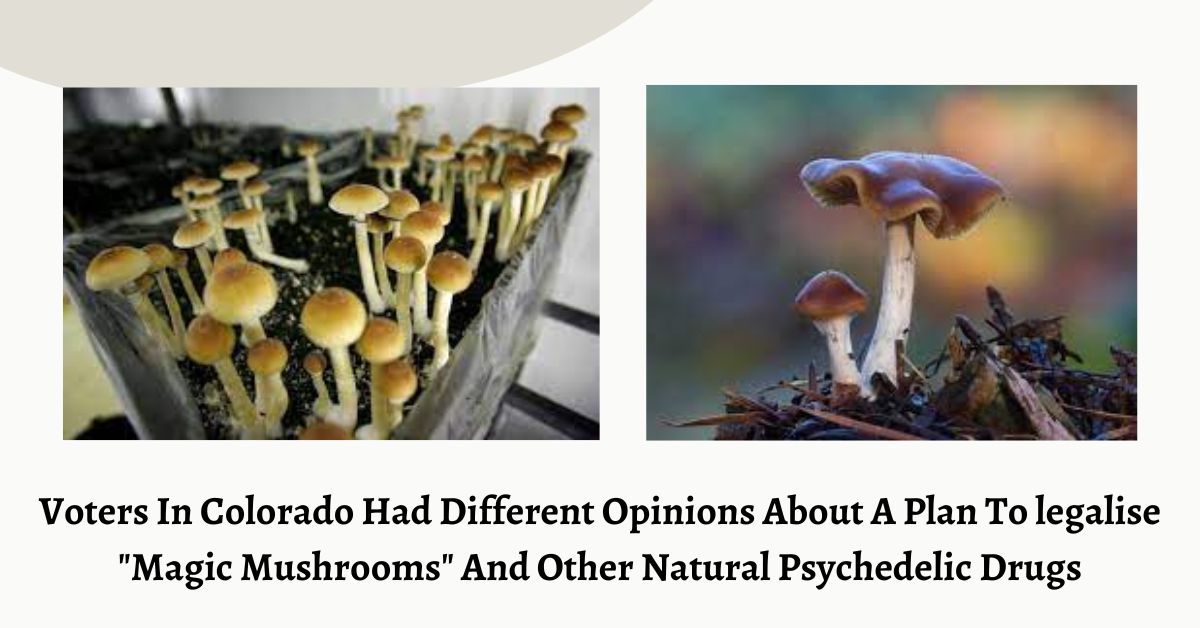 ,000 votes separated the winner from the loser. By midday, more than 1.8 million ballots had been tallied, but the measure’s supporters had yet to declare victory.

The bill would establish state-regulated facilities where people may schedule appointments to use psilocybin, the ingredient found in psychedelic mushrooms that causes hallucinations, and allow those over 21 to cultivate and distribute psychedelic mushrooms.
The proposal does not include a provision for psilocybin retail sales; instead, it asks for licenced “healing centres” to provide customers with mushrooms in a controlled environment.

In 2026, facilities could increase their capacity to three plant-based psychedelics thanks to Prop 122. These include mescaline, which comes from cactus, ibogaine, which is derived from the root bark of iboga trees, and dimethyltryptamine, or DMT, which is a naturally occurring chemical present in both plants and mammals. Licenses to provide psychedelic treatment may also be sought by substance misuse treatment facilities and mental health facilities.

The Controlled Substances Act was passed in the United States in 1970, making psychedelic mushrooms illegal. Even if Proposition 122 is successful, the drug would still be categorised by the federal government as a schedule 1 restricted substance, similar to heroin, for which there is currently no accepted medicinal purpose.

The underground “trip guides” who sit with clients throughout a psychedelic experience and then assist them in processing afterwards are how people currently receive the natural medicines, which are used to cure anxiety and depression. They can also be obtained from friends who grow them.

Denver citizens approved the decriminalisation of hallucinogenic mushrooms three years ago, making possession a low priority for law enforcement. Denver County supported the statewide proposal 65% to 35%, according to incomplete results.

The proposition passed in mountain villages and Denver suburbs, according to incomplete figures, but failed in rural regions and in the politically conservative counties of Douglas and El Paso. The result was 57% to 43% in El Paso County, which includes Colorado Springs.

Voters in Colorado who cast ballots on Tuesday had strong feelings about the statewide marijuana initiative.

When asked if he supported Proposition 122, Colorado Springs resident Jim Sandmore, 64, responded, “Oh hell no. He expressed concern that it would result in the legalisation of more narcotics.

“I didn’t feel good about marijuana becoming legal. I just think that it opened up a bag of worms,” the Republican retired architect stated. What follows? Heroin? What follows, cocaine? Next, what? PCP? It simply keeps up the ladder.

Bailey Johnson did not vote on every issue on the Denver ballot, but she did support mushrooms. Johnson, a 25-year-old nurse, asserted that she thinks psychedelic drugs are successful in treating mental health issues. More therapy alternatives are required since people are having mental health issues, especially in the wake of the COVID-19 outbreak, according to her.

She replied, “We need to open it up so more people may utilise it if they choose.

Additionally, Will Paterson, a Denver resident who opposed the mushroom initiative on the city’s 2019 ballot, cast a vote for Proposition 122. He observed, “It looks like there’s a little more momentum now.

“At this point, it just seems absurd to throw people in jail for drug-related offences like that. In the beginning, I guess I didn’t want people to be walking about on mushrooms, but as time has gone on, I’ve come to realise that concern is probably unfounded.

Marisa Neyenhuis, a mother of four in Highlands Ranch, declined the invitation. The Democrat stated that she thought psilocybin was safe but that ibogaine, mescaline, and dimethyltryptamine needed further research before they should be authorized.

The nonprofit organisation Protect Colorado’s Kids raised around $51,000 to oppose the proposal, with the majority of that money going to internet advertising and texting.