A Norfolk Southern train was struck by a semitrailer towing a concrete bridge beam on Tuesday in Collegedale, causing the train to derail, injuring two passengers, and entirely obstructing the intersection. In contrast, the cause of the crash is being investigated.

At approximately 12:30 p.m. on Tuesday, a driver called the Hamilton County Office of Emergency Management to report an accident. Tri-Community Volunteer Fire Department and Collegedale Police Department rushed to the area and confirmed a substantial train derailment.

When authorities arrived on the scene, they initially reported the incident as a collision with a concrete truck, but Maxwell said the large truck was hauling a beam that was 134 feet long.

According to fire officials, the tractor-driver trailer was waiting for the light to turn green on Tucker Road while parked on the railroad tracks, Maxwell said. She said that when the crossing arms of the Norfolk Southern railroad system were activated, the tractor-trailer could not get clear of the tracks and was struck by the train. 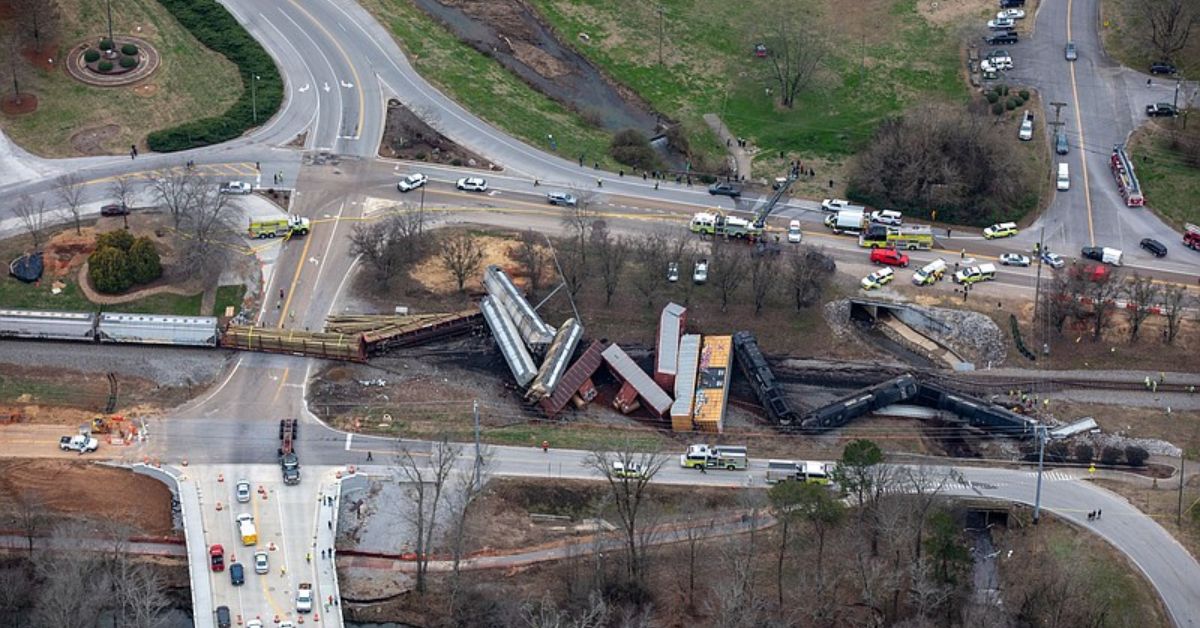 “A horrible tangle was created when three locomotives and ten train wagons derailed and crashed into each other,” Maxwell stated. In a 14-second video posted to Facebook on Tuesday, the train can be seen smashing into the truck’s bridge beam, which is located close to the trailer’s back wheels.

The leading locomotive engine caused the beam to become entangled, which caused it to be thrown into the air and dragged down the tracks and out of sight in a cloud of dust and debris.

According to Maxwell, emergency personnel used absorbent booms and pads to help contain the significant diesel spill for the three locomotives. Two Norfolk employees who had minor injuries were also taken to nearby hospitals by emergency personnel.

According to Connor Spielmaker, a spokeswoman for Norfolk Southern, there have been no complaints of hazardous materials rail carriages being involved. According to Rae-Anne Bradley, a spokesperson for the Tennessee Department of Transportation, the concrete beam was being brought to the Apison Pike project. Bradley stated in an email message on Tuesday that University Drive and Apison Pike are still closed close to the incident. Up until the conclusion of the investigation, the closure will remain in effect.

Bradley said if you can, consider taking a different path through the region. “This closure will take a while. Less than 15 minutes after arriving at the scene Tuesday, Assistant Chief Jamie Heath of the Collegedale Police Department could not adequately characterize the wreckage.