Firefly Lane Season 2: Is There A Season 2 Coming Out? 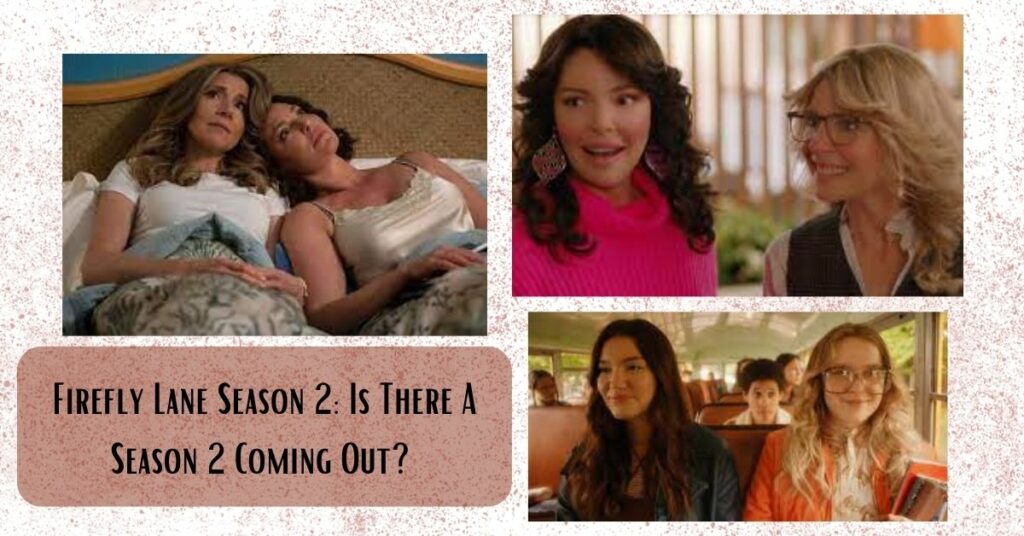 Like us, you probably watched the entirety of Firefly Lane Season 1 the moment it became available on Netflix, and you were left with a massive cliffhanger. To find out when Season 2 of Firefly Lane will premiere would satisfy our insatiable appetite. Kristin Hannah’s best-selling novel and its sequel have more than enough material for more than two seasons, but Netflix will likely only use a portion of it.

The streaming service made the announcement that Season 2 would be the final season today. If you have any inquiries, we would be glad to answer them. Okay, I think we’re ready to begin. Warning: discussing Firefly Lane season 2 will inevitably reveal information about the first season. Stop reading now if you don’t want to know the ending!

Yes! As of the 26th of May, 2021, Netflix made the renewal official through Zoom video. The series’ cliffhanger finale definitely leaves room for more episodes, and we need to find out if Tully’s (Katherine Heigl) and Kate’s (Sarah Chalke) thirty-year friendship can be restored.

Then there’s Johnny (Ben Lawson) and his time spent in Iraq. Chalke stated in the video, “We don’t have all the answers yet but trust us, it’s going to be worth the wait.” And we guarantee that every one of your inquiries will be addressed. Below is the entire video of the season 2 renewal of Firefly Lane.

When Does Firefly Lane Season 2 Premiere?

On December 2, 2022, the second season premiere of Firefly Lane will air its first episode. The second half of Season 2 will air sometime in 2023. Part 1 will have nine episodes, while Part 2 will have seven. Actress Katherine Heigl said the launch date “will be in 2022” through Twitter in August 2021.

What Happens In Firefly Lane Season 2?

What could have broken up Tully and Kate’s tight-knit 30-year friendship will be revealed in season 2. Prior to that, however, Kate must deal with the emotional fallout of Johnny’s disastrous tour to Iraq, and Tully must begin a new chapter in her career after being sued for leaving her talk show.

As a result, against the desires of her mysterious hippy mother, Cloud, she sets out on a quest to learn more about her background, including tracking down the father she never knew (Beau Garrett). As Kate Tully’s career grows as she spars (and flirts!) with arrogant sportscaster Danny Diaz, we witness her and Johnny fall in love for the first time in the 1980s, causing more than a little drama in the newsroom where they both work (Ignacio Serricchio).

They need to cease fighting for five minutes if she is going to meet her match. In the 1970s, Cloud’s incarceration for drug selling and Tully’s relocation distant from Firefly Lane test the bonds of Kate and Tully’s friendship. Even though they’re going through the chaos of high school separately, the girls know that they can always count on one other.

I’m SO looking forward to the second season of firefly, do you guys have any release dates yet?

When Was Firefly Lane Season 2 Filmed?

Production on the second season of Firefly Lane kicked off in Vancouver that August and continued through the fall. Katherine Heigl’s birthday was in November, and we all had a blast celebrating on set. After taking a break for the winter holidays, the show premiered again on February 1. Production finished shooting towards the end of April 2022.

Who Dies In Firefly Lane Season 1?

To some extent, Netflix deviates from canon in this regard. This is a huge spoiler! You probably already know that Kate dies at the end of Firefly Lane if you’ve read the book. Kate, however, survives the events of the Netflix series. Kate’s dad, Bud Mularkey, is the one whose funeral we see.

As of now, Netflix hasn’t revealed who will be returning for Season 2 of Firefly Lane, but it’s safe to assume the series’ primary players will. Let’s take a look at the people that will likely make an appearance in season 2 flashbacks. So long Bud.

A Million Little Things is doing an exterior scene outside The New Oxford Pub in Yaletown late this afternoon & into the evening. That’s rall I’ve heard about so far.https://t.co/ALTHM7IpY3

Season 1 introduced us to Tully, the ambitious anchor of Seattle’s local talk program The Girlfriend Hour. In Season 2, we hope to see where she goes professionally. Heigl is not only a star of the show but also an executive producer. When she was nine years old, she made her debut in front of the camera in a commercial for Cheerios, which launched her career as a child model. Heigl, who is famous for her appearances on Roswell and Grey’s Anatomy, has been married to singer-songwriter Josh Kelley since 2007. A part of Firefly Lane season 2.

After climbing the Seattle industry ladder alongside her closest friend Tully, Kate eventually decides to put her career on wait to start a family. She and Tully had been close for over thirty years, but Tully eventually drove a wedge between them. From what we can gather, here is how that battle went down. A part of Firefly Lane season 2.

Ali Skovbye was discovered when she was just 4 years old and immediately cast in a national car commercial. After that, she starred as a supporting cast member in a film alongside Michelle Pfeiffer and Kathy Bates. A part of Firefly Lane season 2.

Roan Curtis was a regular cast member on The Magicians, which aired on SyFy. She has been on both “Supernatural” and “Smallville” as a guest star.

Kate and Tully got their start in the industry thanks to Johnny, a producer at the local TV station. He struggles with his own troubles and attempts to keep his connection with Kate strictly professional, but he eventually gives in to his feelings for her. A part of Firefly Lane season 2.

To the Beau, Beau Garrett (Cloud)

Cloud, Tully’s mom, is a free spirit. Because of her freewheeling nature, Tully often finds himself taking on the role of parent. This mother-daughter dynamic is nothing like the hilarious Absolutely Fabulous.

Kate’s mother, Margie, is the quintessential suburban housewife. The book by Kristin Hannah is more conservative than the TV adaptation. A part of Firefly Lane season 2.

If people are interested, we’ll keep going. More so than in Firefly Lane, Tully is the main character in the sequel Fly Away. A second season might take up where the previous one left off, and continue with the tales in Fly Away.

Maggie Friedman, the show’s creator and showrunner, told Entertainment Weekly, “One of the things I think has been thrilling is that we have preserved some key moments from the book and been very true to those, and then there are other things that we’ve done that are new.”