Emily In Paris Season 3: Does The Audience Find The Season 3 Fascinating? 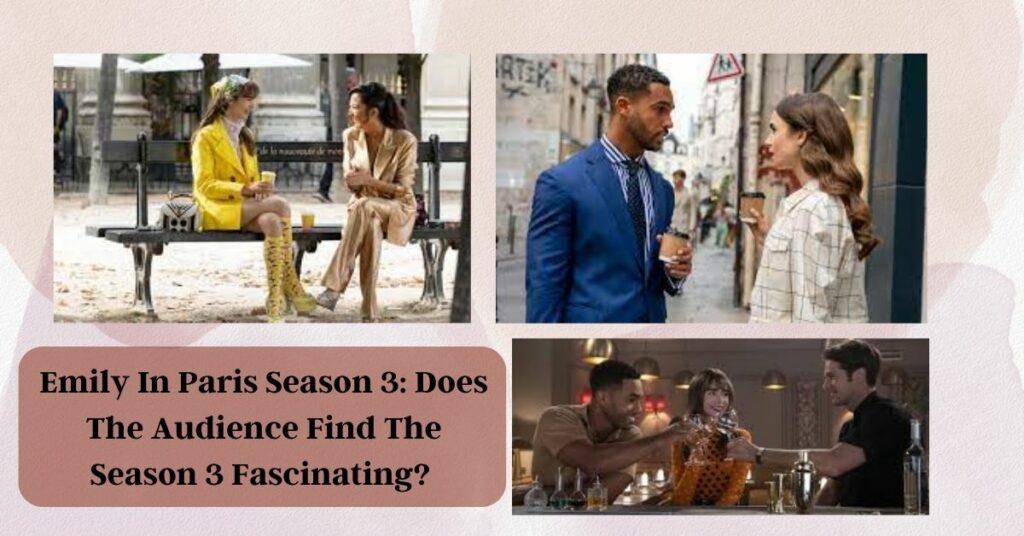 The release of Emily in Paris Season 3 draws nearer with each passing day. Emily in Paris won our hearts in spite of (or perhaps because of) its simplistic storyline and rehashed rom-com tropes in the very first season. The series’ short episodes and format, which is predictable in some ways but still capable of surprising in others, make it ideal for binge-watching.

Fans of the original Netflix comedy series have watched Season 2 for a total of 280 million hours in just the first four weeks since it was made available online. The show’s creator, Darren Star of s*x and the City, has been nominated for multiple awards, including an Emmy for Outstanding Comedy Series.

However, the show has also been criticized for doing nothing more than reiterating tired generalizations about the French. Emily Cooper (Lily Collins) had to make a tough decision at the end of Season 2: either return to her work in Chicago as planned or accept Sylvie’s (Philippine Leroy-Beaulieu) offer to leave Savoir and create a new marketing agency.

Collins told People, “Whatever option it is, you know it will be loaded with drama, fashion, and a lot of fun and romance.” Now that Gabriel (Lucas Bravo) and Camille (Camille Razat) are back together (and living in the apartment beneath her, no less), Emily (Emily Mortimer) is also in the midst of relationship drama, but she’s trying to build things with new love interest Alfie (Lucien Laviscount), who has admitted to staying in France just for her. In what way will things develop? Emily in Paris season 3.

When it comes to learning about production developments, Instagram has proven to be a gold mine of useful information. As of June, filming on Season 3 of Emily in Paris had officially commenced, as confirmed by a post on the show’s official Instagram account. Since then, Ashley Park has given us glimpses of Lily Collins sight-seeing in Paris on set, and we now know that production concluded in late September.

Shortly after Season 2’s conclusion, Netflix renewed the show for a third and fourth season, so we can continue to watch Emily Cooper’s selfie-taking antics for a while longer. Emily in Paris season 3.

In Season 3, Emily’s adventures abroad will continue as she juggles her work life, romantic life, and personal life in a new country. Synopsis for Season 3 provided by Netflix: “Exactly one year after uprooting her life and relocating to Paris to pursue her dream profession, Emily finds herself at a pivotal crossroads in every area.

While continuing to immerse herself in the adventures and surprise turns of life in Paris, Emily will have to decide exactly where her allegiance lay (at work and in her romantic life) and what those decisions entail for her future in France.”

On September 24th, Netflix released the first trailer for Season 3, in which an angry Emily makes her traditional plea for assistance by chopping her bangs. You can bet she’s feeling terrible about it right now.

The core cast members will be back, including Lily Collins as Emily, Ashley Park as her best friend Mindy (who we hope will receive more screen time), and Lucas Bravo as Gabriel, the romantic restaurateur. In addition, now that Lucien Laviscount is a series regular, we can anticipate seeing more of Alfie. Two new cast members were just confirmed by Netflix. Season 3 will feature guest appearances from Paul Forman and Melia Kreiling.

In the film, Forman will play Nicolas De Leon, a prince and high-ranking executive at his family’s business (of course). Nicholas De Leon “appears to live a charmed life,” but Netflix notes that “although the family name is an infinite supply of income, power, and access,

it is coupled by a tremendous responsibility to show himself as more than just a nepotism hiring.” Kreiling will make a cameo appearance as the Greek artist Sofia Sideris, who is in Paris to see Camille (Camille Razat) and present her work. Guess who you believe might be her potential suitor.