Atlanta has received lots of attention from the viewers and has been appreciated and loved by people across the globe. Since its inception in 2016, the series has just climbed up the charts in viewership and creativity. Hence, the fans are excited about the third season as if it had just been released yesterday. However, the Atlanta Season 3 release date is confusing as to whether it will premiere in February or in March.

Well, worry not, for we are here to clear the clouds of confusion and help you assess the exact release date of Atlanta Season 3. The series is scheduled to be released on FX, and fans ask about its Release Date. Will it be available to watch in February or March? Here we have every detail you need to know about the brand new season of the Earnest “Earn” Marks (Donald Glover) and Paper Boi, aka Alfred’s story of success and struggle. 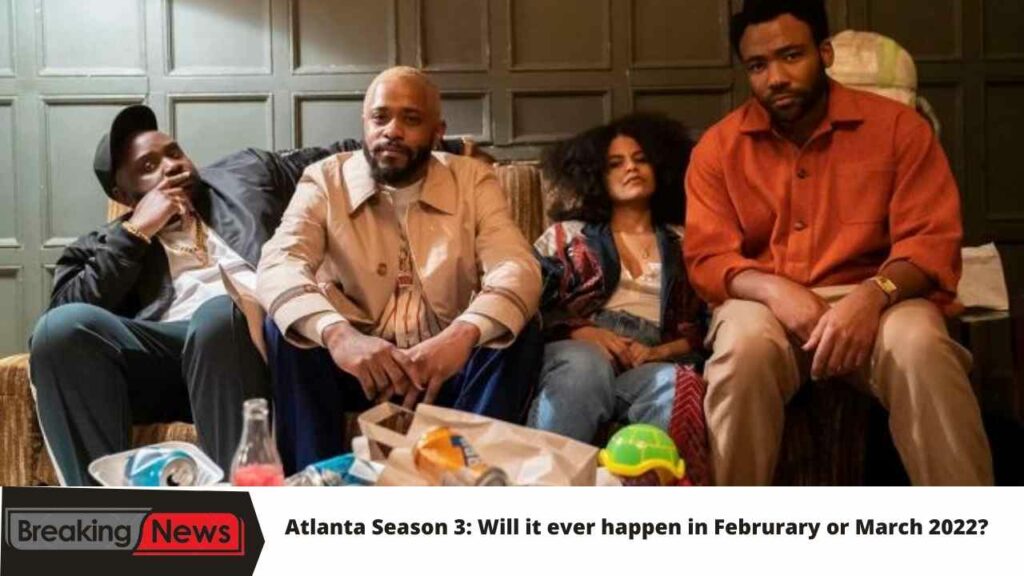 Atlanta is a comedy show which features Donald Glover, also known as childish Gambino as Earnest “Earn” Marks and Paper Boi Alfred. The show revolves around the said characters portraying their struggle turning into success.

The release date of the third season has been disclosed and is confirmed to be on 24th March 2022. It has been approved by our sources and many other notable news agencies. However, our most significant source of reliability is Eric Schrier, the president of FX entertainment (FX is the broadcasting owner of the show). In one of his interviews said: “We are thrilled to have Atlanta back with a new season on March 24. Once again, Donald Glover, the producers and stellar cast have delivered another signature season synonymous with the excellence that makes Atlanta so great.”

What has also come to our knowledge is that the series will not release in one go, and just two episodes will be released on the premiere date. The rest of the episodes will be available for the fans to watch on a weekly release basis and will be aired every Thursday.

The third season is coming on the screens after a long period of three years, and Hence the restlessness amongst the fans is valid. The delay was due to many reasons, like the ongoing pandemic and other production-related issues. However, what is also pertinent to note is that the makers of the series are known to keep a considerable amount of time between the two consecutive seasons. The second season was also released after a long wait of two years in 2018.

The third season is expected to carry on with the same cast as in the previous two seasons, as far as the lead cast is concerned. However, we hope many new faces join the show as a new cast, adding new vigour to the show.

Donald Glover is sure making a return in the role of Earnest ‘Earn’ Marks. His earlier notable works include roles on tv series like Spider-Man, playing Aaron Davis, also in The Martian, in which he played the role of Rich Purnell and many other significant works. Donald overall is a critically acclaimed comedian, and it will be a treat to watch him again in the series.

Brian will also return and will be playing the role of Alfred Miles. Brian also has some significant works done in his name and has strong acting skills to portray. His acting splendour ignites his character of Miles in an exciting light.

Lakeith Stanfield will also return as Darius Epps in the third season of Atlanta.

Zazie Beetz will be seen in the role of Vanessa Keefer, and previously she has been part of significant films like Deadpool, Joker, IN twilight zone she played Sophie Gelson and has also played as a voice actor in many movies.

The cast above will be treating us in March, and we expect many other faces to join and catalyze our entertainment and tickle our funny bones.

We are keeping our ears to the ground and constantly collecting updates from our sources and other mediums. We will continuously update this information collected by us. So, keep visiting us for all the updates that may or will happen.

Where to watch Atlanta Season 3?

The good news for the fans globally is that the third season of the series will stick to TV and stream online on HULU. This release, however, is subjected to a delay of one or two days post the release of it. Hence, the fans will have to contain their excitement for two or three days after the third season’s premiere.

Other major OTT platforms that will have the broadcasting rights in America of the Atlanta Season 3 are BBC Two and iPlayer.

For updating yourself with the events that have followed in the first two seasons, you can refer and watch them on Disney+.