It has been 27 years since Princess Diana’s Revenge Dress scandal and we still haven’t moved on from her iconic outfit! The dress was recently recreated for actor Elizabeth Debicki who plays the role of Princess of Wale in The Crown. The black risque outfit represented her bold, free and confident nature.

The telegraph aptly described it as the “ultimate modern example of revenge dressing.” So why is Princess Diana’s revenge dress still so relevant, even after 27 years? Well, simply because it was so iconic and bold! Not only was it a representation of Princess Diana’s personality, but it has become a symbol of power and strength for women all around the world.

After all, “Fashion hath no greater thrill than when being deployed to express rage.”

The revenge dress refers to Princess Diana’s black dress at the Serpentine Gallery’s summer party. Initially, the Princess of Wales declined the invitation. However, just after Prince Charles’ confessed his love affair with Camilla Parker Bowles, she called up one of the party’s organizers and accepted the invite. 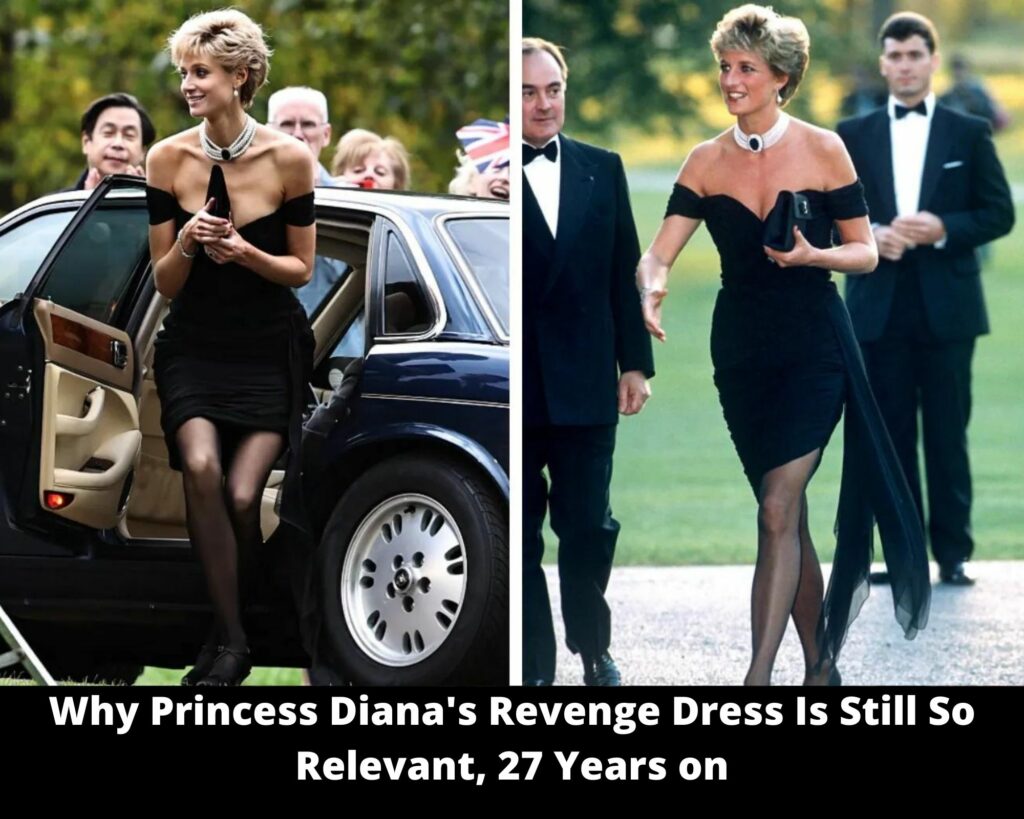 She wore a knee-length off-shoulder Christina Stambolian dress. It had a deep sweetheart neckline with a back trail that flowed effortlessly behind her. She paired it with sheer black tights, Manolo Blahnik high heels, and a white statement choker with a black gem.

Although the Princess planned on wearing a not so risqué outfit, she changed her mind after the original brand announced that it would be dressing her. Additionally, she wanted to wear the dress for quite some time. However, she backed out every time she decided to wear it.

Lady Gaga, Adam Driver and The ‘House of Gucci’ Cast Dazzle on the Red Carpet

Princess Diana’s dress was a statement of her bold nature. The designer Stambolian commented on the dress saying,

“[The princess] chose not to play the scene like Odette, innocent in white,” she said. “She was angry. She played it like Odile, in black. She wore bright red nail enamel, which we had never seen her do before. She was saying, ‘Let’s be wicked tonight!’”

“She wanted to look a million dollars – and she did.”

The Legacy of the Revenge Dress

The Revenge Dress has become an inspiration for women all around the world. It carries a huge symbolic purpose that millions of women still resonate with today.

A fashion writer, Eloise Morgan, created an Instagram page called @ladydirevengelooks in 2018. She shared iconic pictures of Princess Diana’s bold looks after her divorce. The account is followed by more than 100,000 people!

“I think Diana is an embodiment of the movement. She was truly a feminist, and had a reputation for being rebellious – but at the same time held herself with so much grace. She’s an icon for women and represents the power that comes from being ‘alone. I can’t imagine a time when that idea would ever become out of date.”

All in all, the Princess’ sleek silhouettes with bold necklines have become a statement of freedom, sexiness, and confidence for women all around the world! Even after 27 years, the legacy of her Revenge Dress still lives on.