After disturbing news of fans dying during a concert at Astroworld came to the surface, the employees present at the event revealed some surprising information. Astroworld staff was told to report potential fatalities as ‘Smurfs.’ The organizers prohibited them from using words such as ‘dead’ or ‘deceased.’

Backstory of the Astroworld Event

During Travis Scott’s event, the mosh pit around the stage got extremely overcrowded. It got to the point where people couldn’t breathe and started falling. A lot of panics ensued as a result of this and people died as others trampled over them.

Number of Deaths At Astroworld

Out of the 50,000 people that attended the concert, eight were found to be dead. This includes two 14 and 18-year-old teens and a 9-year-old boy!

CNN obtained a security and emergency medical response plan consisting of 56 pages. It was written by the Texas-based concert promoter Score more Austin. It outlined the various situations that staff may have to deal with along with instructions to manage the situation. In the response plan, Astroworld staff members were instructed to call the deceased concert attendees ‘Smurfs.’ 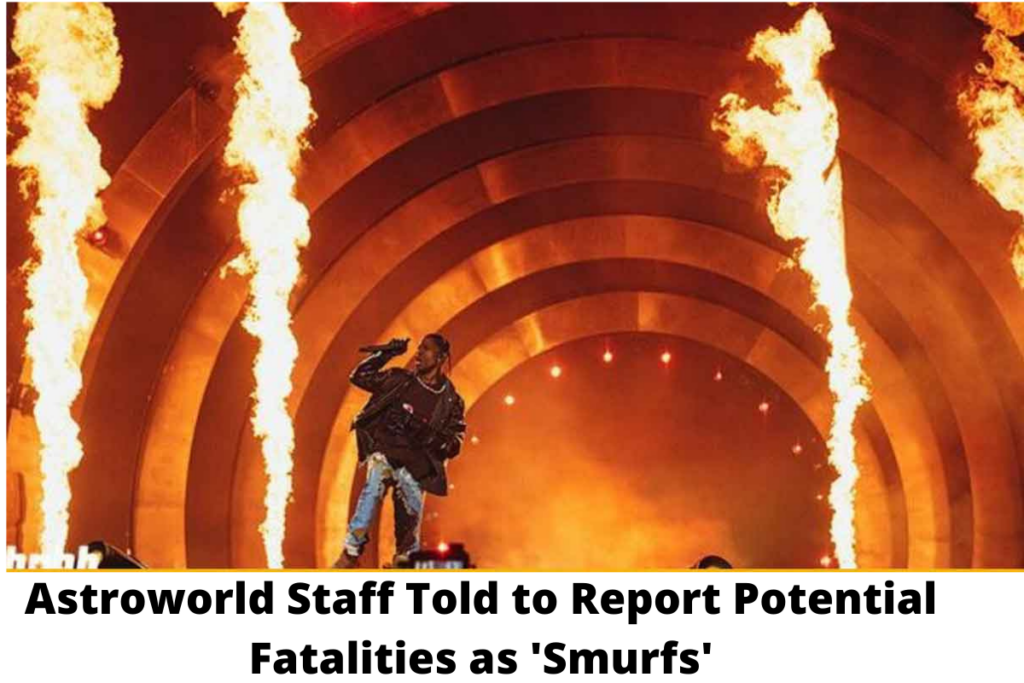 The event operation plan by the organizers for the two-day event reads, “ the potential for multiple alcohol/drug-related incidents, possible evacuation needs, and the ever-present threat of a mass casualty situation are identified as key concerns.”

The document also asked employees to use a code word in case of death causing injury at the venue. The security dealing with a potential fatality was specially instructed to begin by “notifying Event Control of a suspected deceased victim utilizing the code ‘Smurf,'” borrowing from the blue animated children’s characters.

The document stresses staff should “never use the term ‘dead’ or ‘deceased’ over the radio.”

Smurf probably refers to the fact that victims were turning blue as they suffocated and died. Twitter user @diabloxantiago recalled his experience at the event in a video. He told viewers that the deceased turned black and blue as they received CPR in the VIP section.

To prepare for any fatal incidents, the organizers prepared an event plan. It stated, “Based on the site’s layout and numerous past experiences, a Security Plan has been established to help mitigate potential negative issues within the scope of the festival.”

The experience includes several bad things that happened recently. During Astroworld 2019, three people received severe blows as a stampede of fans rushed through the entrance gates at the event. However, the plan did not include a protocol for dealing with a crowd surge, the likes of which occurred at the event.

The document also focuses on protocols to deal with active shooter situations as well as bomb threats. A child that disappears at the event also required staff to use a special protocol including a code word called CODE ADAM. Additionally, staff members are guided to “watch for individuals attempting to arouse the crowd” and “monitor behavior for escalation.”

Only two people have the authority to stop the show according to the newly discovered document. This includes the event’s executive producer and festival director.

The Aftermath of the Astroworld Event

On Monday, Score more released a statement explaining how they’re handling the situation. According to it, they are providing footage from event cameras to the Houston police. The organizers wrote,

“We wanted to provide an update on the steps that Score more, Live Nation and the Astroworld Fest team have been taking. Throughout the weekend, we have been working to provide local authorities with everything they need from us to complete their investigation and get everyone the answers they are looking for.”

After Weeks of Declines, US Covid Cases Have Stalled at a High Level