Almost all the fans of this romantic drama must have watched this series on Amazon Prime. This Indian web series called “Made in Heaven” was released on Amazon prime on8th  March in the year 2019.

This series, which was produced by Excel Entertainment. It shows the life of  Karan and Tara, who were wedding planners and managed a company known as Made in Heaven, in Delhi. This series was the fourth original Indian series of Amazon Video and had gained a big fan base.

The series was made by Reema Kagti and  Zoya Akhtar. The story was written by Alankrita Shrivastava. The 1st season had 9 episodes in total. The series was directed by Shrivastava, Akhtar, Prashant Nair, and Nitya Mehra. Season 2 was going to be released in 2020, however, it got delayed due to a pandemic.

This show had a total rating of 8.2 on IMDb and other than that it even got a lot of praise due to the minimalism in the story. And this makes the fans wait curiously for season 2 of the series. Well, the show was planned to start production in 2020, however, the pandemic completely affected the production. However, here is all you need to know about season 2 of Made in Heaven. 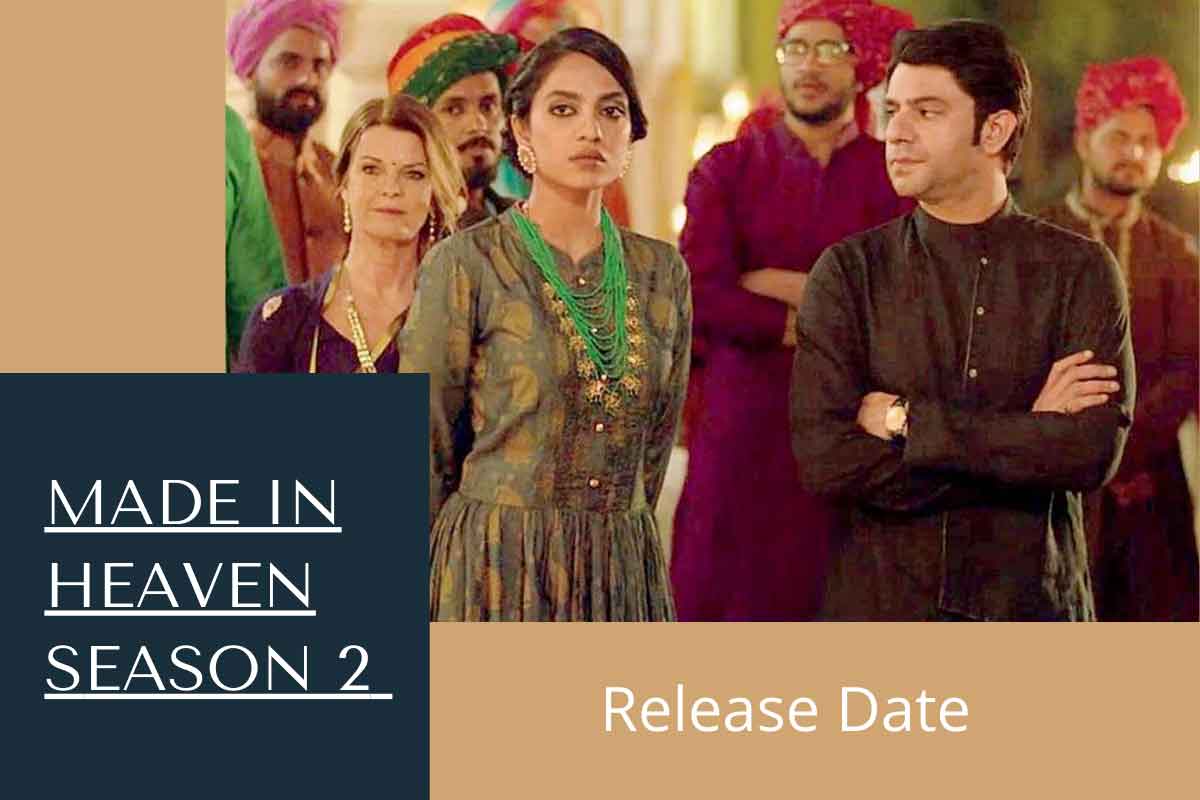 The Release date of Made in Heaven Season 2

As of now no official announcement of the release date has been made by the makers. As the shooting was hampered due to the pandemic and the series was paused for a while. The production was all set to begin in the year 2020 but anyhow it got delayed

However, as of now, the deadline was extended till March 2021. And a few months ago there was news of the production being resumed for the upcoming season. Keeping in mind the craze of the audience, it is more likely to believe that the next season might be released in the first quarter of 2022.

Made in Heaven Season 2 Cast

As of now, there are no such details about the cast. But it is assumed that most of the characters from season 1 will be back. Most likely Karan Mehra ( Arjun Mathur), Tara Khanna(Sobhita Dhulipala), Faiza Naqvi( Kalki Koechlin), Adil Khanna(Jim Sarbh), Kabir Basrai(Shashank Arora), and Jaspreet “Jazz” Kaur( Shivani Raghuvanshi) will be played.

Other than those characters Neel Madhav(Arjun Mehra), Vijay Raaz(Jauhari ), Zachary Coffin(Adam), Shibani Bagchi(Natasha Singh), Vinay Pathak(Ramesh Gupta), and the list is there. Other than these characters there might be some new faces as well. However, we will keep you updated as soon as we get details about the show.

The Plot of Made in Heaven Season 2

As the show is still in the making so no official details about the plot have been out yet. And for more specific details we have to wait to hear from the makers. However it seems in season 2, all the incomplete questions from season 1 will be answered. Made in Heaven shows a lifestyle of the new and old backgrounds with a constant clash between modern and traditional ideals.

Made in Heaven’s plot takes place at a big Indian wedding. All the traditions of weddings and customs are built perfectly in Indian society. However, the people getting married are unable to connect to any of the daily rituals taking place.

The story’s actual protagonists were the wedding planners. They were the actual mastermind behind the plan. They search for a venue, arrange the designs and food and along with that even handle the emotional status of the people connected to the particular wedding. Thus this story was relatable to people as a powerful plot about the larger concerns in Delhi and also on human psychology

The Trailer of Made in Heaven Season 2

The trailer for Made in Heaven season 2 won’t be out for a few months now as the shooting is still going on. Until then watch the entertaining season 1 and we will update you once any news about the upcoming season is out.