Shazam is one of the popular DC movie series released in 2019 and turned out to be a great hit. Now, the news of Shazam 2, also known as Shazam! Fury of the Gods is in the news for a sequel. It is an American action, comedy, adventure, and fantasy film directed by David F. Sandberg. However, the story is written by Henry Gayden. Back in 2020, it was revealed by the makers that Shazam 2 would be coming for the fans!

However, it looks like fans have a few more years to enjoy this movie. The sequel is accepted to acquire great success. Fans have been going crazy since the news of Shazam 2 is out. The good news is that the movie is already in development, and you will hear soon from the makers of the film. The movie was initially set to release in April 2022, but the current pandemic situation has affected each and everyone off of us. And it is one of the reasons why the movie is shifted to 2023!

But fans find relief in knowing the official title of the movie. The moviemakers revealed the poster of the poster in August 2020, and it is something huge for the fans. However, fans expect a lot as it has once again brought the creative team together for the joyous tea. To know more about the movie, read the full article!

The film was earlier scheduled to arrive near cinemas on April 01, 2022, but the date was pushed again to November 04, 2022. However, this is not a confirmed release date. In October 2020, the sequel was again delayed to June 02, 2023, in UK and US nearby cinemas. Fans are hoping this time they will stick to the date. The date shifted because of the pandemic, as it has affected the whole production team and individual. It is the latest announcement that the makers make of the movie. Fans are hoping that they stick to the date this time! 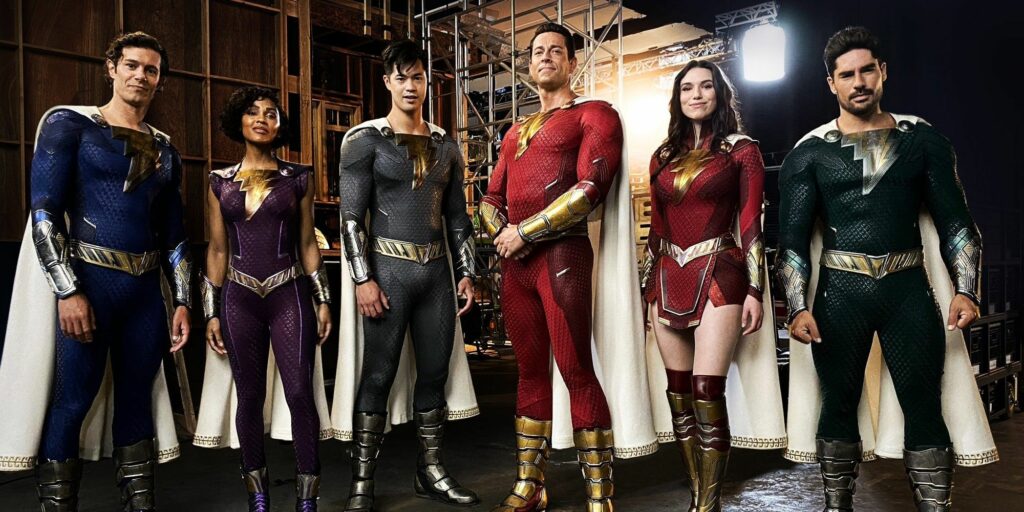 Fans already know that the core and soul of the last movie, Shazam, will return with the good news for his fans! Almost all the characters are going to remain, but you can also expect some new faces. The list of the cast goes as follow:

The prominent faces of this excellent movie are going to make a massive comeback for the sequel. However, the founder of the movie has not revealed any plot details as yet. So, it is a little bit challenging for the audience to contemplate it. However, the film is about a child whose family can become a magical superhero by repeating a magical chant. The moviemakers are secretive regarding the movie’s plot, and there is not much detail about it. So, it is a little difficult for us to comprehend. As per the resources, the upcoming movie will be a lot more action-packed with various wow moments. So, all the fans, get prepared and hold your breath for till the film hits theatres!

As mentioned earlier, the film has not begun the production of the sequel as yet. Therefore, the details of the movie are still a secret to the fans. So, there is no trailer for the fans. Consequently, it is pretty difficult for us to tell the exact releasing time of the trailer. However, fans can watch the trailer of the first movie on YouTube. The trailer is usually released a month or weeks before the releasing date of the movie, and it looks like you have to wait till October 2023 to see the trailer of Shazam! Fury of the Gods.

Shazam 2: Where To Watch

You can take the subscription of HBO Max to enjoy this iconic movie. Besides, there are many other online streaming platforms to watch this excellent movie, such as Amazon Prime. Other than that, the film will also be available on Blu-ray, 4K, and DVD. So, do not hesitate and get the subscription!

There are no official updates or details of the movie released as far now. However, you can follow us for more information and the latest updates about the new sequel. So stay tuned, and share your thoughts with us!